The restaurant Da Nisio first opened in 1986 and at first it was a typical family run Tuscan restaurant like many others, but year after year it became something a little bit more unusual..
We inspired the menu to the Tuscan cuisine, but it doesn't remain exactly the same.
Each season has its own colours and flavors, and we always like to experiment with recipes and tastes, yet giving our faithful clients' the certainty of finding their favourite dishes. 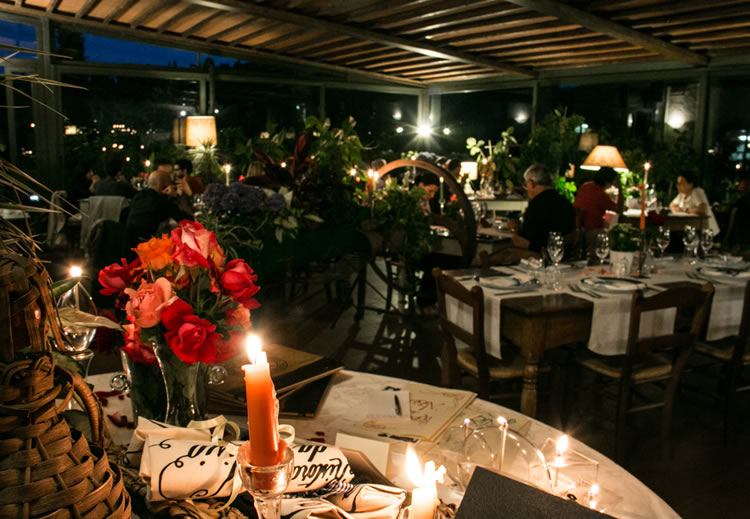 The restaurant hall illuminated by low light at night

As wine is part of our nature of Tuscans we love to accompany a yummy pasta or meat dish with the right wine. During the years we added wines to the cellar of the restaurant, and now we are pleased to say that we both have bottles of wine suitable to celebrate a special and good wines that would simply match very well with what you're eating.


The style in which the restaurant is furnished is inspired to our tuscan trdition: a wooden madia (a chest that used to be employed to make and store bread), carts full of flowers and a lot of little charasteristic details contributing to create a rustic and yet elegant style, that really tells our guests of some values of the old Tuscan way of life.
The restaurant hall is a veranda made of expandable glass panels, that would show you the panoramic view until the sunset.

At night the hall is illuminated by candles and during the winter the light of the fire crackles in the stove, creating a special atmosphere for a perfect romantic dinner in the Tuscan style.
During the day the glass walls let the light of the sun and the panorama of the countryside surrounding San Gimignano in. In front of the restaurant there's a garden that more than once has given to the kids the chance to work off the lunch they just ate ;)

But just like with the menu even with the restaurant hall we like to change a little now and then. In effect, following the seasons, the colours and the shapes they bring with them, during the winter we like to add some colour by decorating the hall with red of the pungitopo (butcher's broom) and the green of the agrifoglio (holly), while during the summer it's the yellow of the grain and during the autumn and the spring it's the orange of the pumpkin and the thousands of colours of the flowers.


This restaurant was recommended to us by a local who suggested we not eat inside the walled city of San Gimignano to avoid the tourist traps. It was not crowded and the food was delicious. Great service and really pretty setting. Everyone enjoyed their meals including a few picky 11 year olds :) - from Tripadvisor

Why do we put so much effort in changing the look of the restaurant now and then? It's not for the clients, but especially for us. Because we love what we do and it's good to rediscover the place where you work every time a little bit different from the day before.

You'll find the restaurant Da Nisio right on the road leading to San Gimignano, but in a position a little bit overhead, from which you can see also the Monteoliveto minore Abbey.